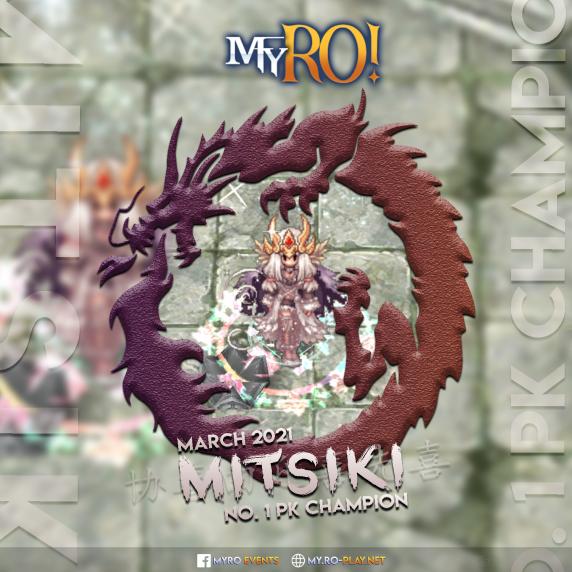 Last One for the Grandslam!

Last Man Standing's (LMS) most respected and most feared Shadow Chaser in MyRO, Mitsiki, has defended her throne once again at the #1 PK arena, giving her the chance to compete once again for a Grandslam title!

Starting from eliminations, she quickly decapitated MELIONES [Sura] 2-0 with ease. Giving her the momentum she needed as the series progresses. Next is LEE MIN KAMBS, a fearsome Rune Knight that almost crushed Mitsiki's chance to win the PK title. The Rune Knight showed that he can dethrone the defending champion, yet it's still not enough to bring down Mitsiki! Eventually, Mitsiki won their match 2-1, which advances her to the Finals to face a rising start in the PK scene, Noli Me Tangere [Genetic].

Noli Me Tangere indeed gave his best as he faces Mitsiki, but it was an effortless match and expected win for the Shadow Chaser. It was a clean sweep for Mitsiki, another effortless game for her. As she advances to the Face-Offs, everyone was unsure of the outcome because of a contender's strange appearance in the Face-Offs. Antics, a ranger from Gonryun, was really not expected to make it out till the Face-Offs, yet she did it. Even though Antics was considered a threat for everyone, Mitsiki made sure that this series is hers already. Face-Offs was supposed to be the most intense match in the series, yet Mitsiki swept it 3-0! Antics was no match from the hasty Shadow Chaser, causing her to fall down round by round.

Mitsiki is now MyRO's #1 PK for March and is currently holding a 2-peat title! She still bears the #1 PK Crown and will compete next month for a chance to secure a Grandslam Title for her and LMS! Will she be able to make it happen?