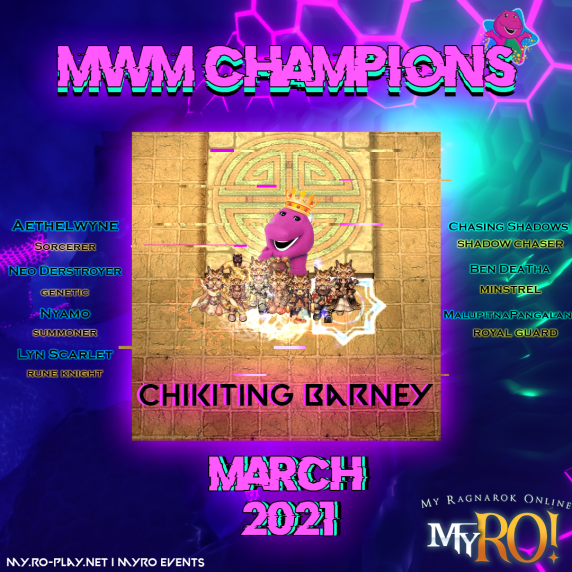 Chikiting Barney from the Hermit Land, Gonryun stripped off Greenwood Lake Guild's chance for a 2peat title at the MyRO War Master Championships! It was an act of successful revenge by Gonryun after the shameful loss they had from the last MyRO War Masters Championship.

With the hopes of bringing back and competing for the title once again, Chikiting Barney started their run with a new set of players to fill their lineup. However, they were not consistent with their scoring, which gave the opponent a hint that they will not compete for the Finals.

They only competed once in the first week of the scoring and twice in the last week before the Finals. They devastated Greenwood Lake Guild 5-0 in every encounter they had during the scorings. This showed that their new lineup was a threat and could really be the lineup that would become the new Champion for March.

On to the Finals night, their series was a long trade of points from both parties. Alternate wins from Chikiting Barney's first point, then Greenwood Lake Guild's first point till both parties reach a 3-3 tie. As Chikiting Barney earned their 4th point, it was the turning point of the whole series. They were able to close off the series at the 8th round!

Chikiting Barney is now MyRO's War Masters for March! They received the Golden Dragon Helm, PODs, Megaphones, and of course, the honor and title for the said event! Will they be able to secure a 2peat win this April?