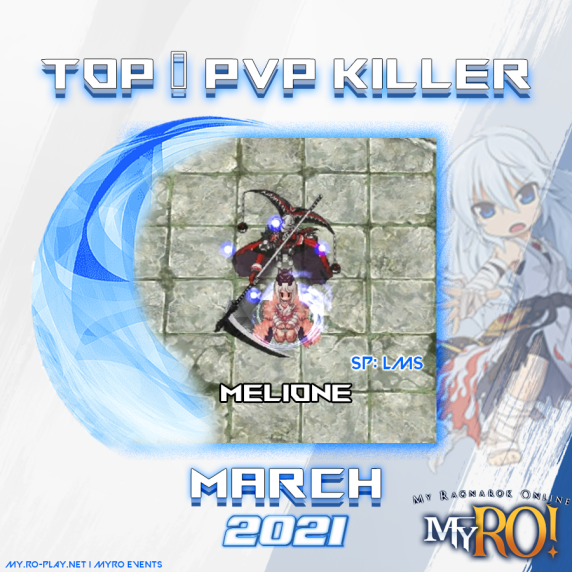 A Sura has proven herself worthy of being the TOP PVP Killer this March 2021!

Sura are known for it's swift skills and fast hands. Awesome combo and super fast as fast as lightning. Sura has been balanced a lot since 2012 due to it's powerful ASURA STRIKE!, we all know that Sura are hard to kill with their set of skill. Sura doesn't need to have over-geared equipments as one asura strike makes the player crumble in fear. While Sura is hard to kill, they are also hard to play. You need to balance every skill, equipment stats and damage to get the optimum results Not all players can use Sura and sure hell it's not an easy task. It's a no brainer that our sura Melione reached the top as she has been using Sura since 2015. Those years of experience has been paid off. She might not win the PK, but she sure hell made the It takes a sklilled player to balance the offence and deffensive skills of a warlock. and Melione is not knew on this server and has proven he belongs to be the top with an outstanding record of kills over death on the PVP ladder.

She always leads the bloodbath with a tiger canon on QTB box Event. Always make sure to hit all those breakers and crumble in fear. When melee players tried to outsmart her, she always make sure to reflect those damage making them harder to kill. She managed to get the most kills she could garner per day despite having many opponents killing her over and over and battling the QTB Box. It only shows that her years or experience, wits and skills throughout this run wasn't affected; thus, her performance was indeed outstanding!

As it gets closer to the PK night, she made sure that he will secure the top ladder. Making sure to be online every QTB to kill other players and making sure she maintains her position. Eventually, she finished the run placing at the top of the ladder with just 50 kills ahead of the 2nd placer. Now, Melione is MyRO's Top PVP Player for March!