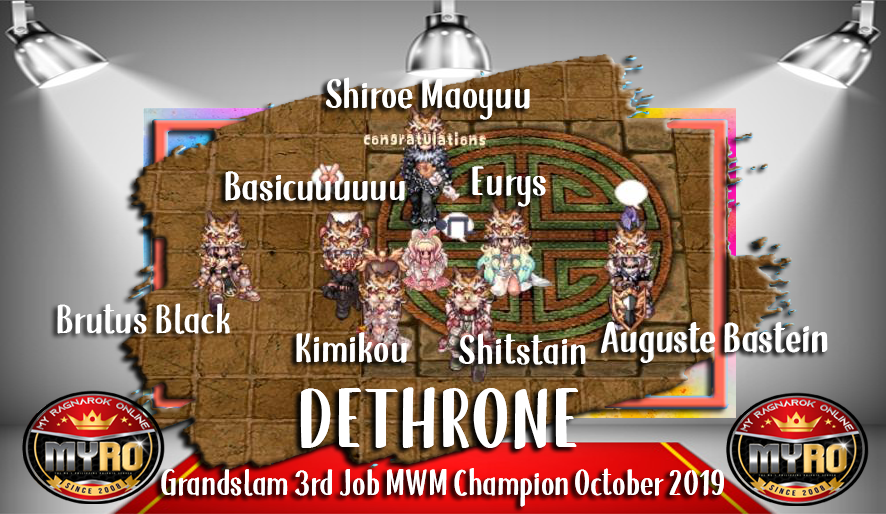 MyRO War Masters, the anticipated team player versus team player style where each member combines and group themselves to seven against another seven of the opposite team. Each member of this goes "WAAA" or "AAAAAA" but of course we won't hear this on the game. In reality we say this words while we gear ourselves to beat those snot-nosed douches...or we just beat the crap out of them with swords, spells, arrows and fist.

In the history of MWM events on MyRO, the pride of Aldebaran, their own glorious team was always first, was always dominating everyone and their last battle was never as fast as any game in the MyRO MWM history. Game Masters said this MWM event was done in fast meaning the event ended early.

Anyway, let's do a flashback last October 26 for recap of the MWM night.

The night opens as Dethrone from Aldebaran and Exercito Brasileiro from Lower Prontera clash as both of them immediately advanced to the Finals. Dethrone, without hesitation, siege the enemy lines forcing the defense of Exercito Brasileiro to fall apart easily claiming the first round for themselves.

Because of the hasty strategy of Dethrone, their opponent couldn't find a way to escape defeat in every round, this made an opportunity to seal the whole match. Dethrone won with finesse, an easy 5-0 landslide against their opponents.

Dethrone was hailed as the MWM Champions for the month of October and received a Grandslam award! Another milestone for the pride of Aldebaran