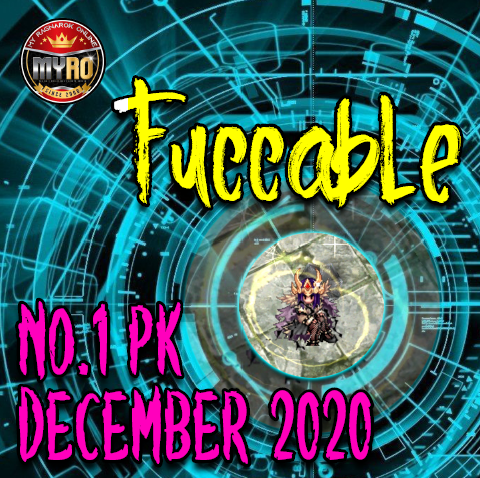 Shadow Chasers will never be a thing in the past when it comes to the #1 PK event in MyRO. Thanos being our recent SC and PK king in the said event, a new Shadow Chaser has risen and took his place in the throne!

Last Saturday, December 19, Fuccable made his entry to the event as a new uprising star in PvP. Being his first time joining the event, expectations were quite low for him and no one expected him to perform that well in the battlefield.

He astonished the crowd as he stepped on the battlefield dominating each opponent he came to face with from eliminations to semis to finals. Each foe slowly crumbled as he devoured each one of them per round. He was as if a former PK champion in disguise of a newbie.

From the very start till the final, he showed no remorse to any players he came in contact with. Furious strips, masquerades, manholes, and triangle shots were all he could offer yet his opponents couldn't handle it. Win by win he was a step closer to finally competing in the face-offs and a chance to ensure the title for him.

Face-offs started with a very intense trade of combos and skills yet he came prepared. He was unbeatable at the moment and anyone who dares to still stand up against him slowly burns in his own battlefield. Round by round same dilemma, no one could handle him, no one could stop his reign and eventually the match has come to an end. He has become his own dream!

Fuccable is now MyRO's #1 PK for the Month of December! He is now the holder of the prestigious PK helm and will be defending his title next month!