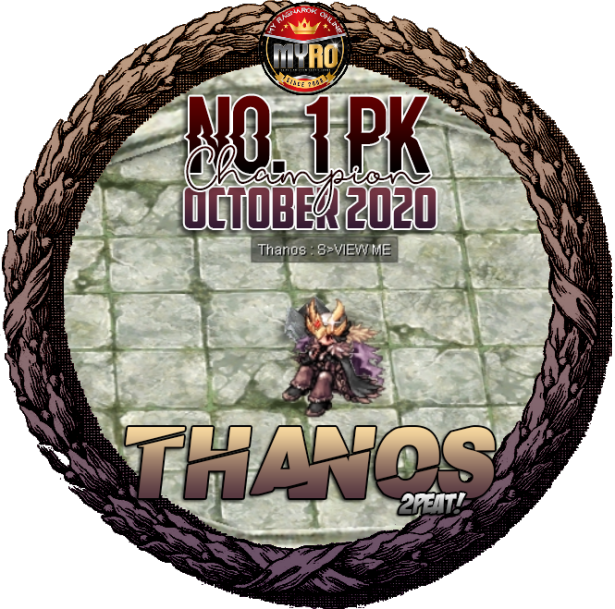 Thanos, chosen by Oblivion, the fearsome villain we all know, has now taken form as a Shadow Chaser to defend his throne against puny foes who dares to take his spot at the top.

Despite issues and allegations towards him and his troupe, he still stood firm and competed for his second title at the MyRO No1 PK Event!

Coming off to the first match, he faced the daunting Rune Knight of Lower Prontera, Netty Quindrizz. A lengthy match was expected, but Thanos had other plans for him. Before hitting the 4-minute mark, the Rune Knight seemed to drop off his pace; he missed all of his ravaging storm blasts against the Shadow Chaser until he ran out of his runes and eventually crumbled down to the ground.

Next was a second-rate Sura, Nephalem. He resembled a mediocre and appears to be so full of himself he forgot that he was fighting a defending champion on the battlefield. With every shouted mocking phrase was the number of triangle shouts he received. And well, clownery has no place in such an event; it'll just lead you rock bottom.

Lastly, he faced his weakness at the face-offs, a Shadow Chaser. In the lore of Ragnarok, when it comes to PvP, a job's weakness is also his job. Shadow Chaser vs. Shadow Chaser, no advantages; the only weighing factor is the player's skill. Still, Mitsuki from LMS struggled at all three matches; Thanos pinpointed all of her weaknesses and used them to finally finish her.

It was a clean run for Thanos, with 7 straight wins and no losses! He is now titled as MyRO's No1 PK for October and November! This allows him to fight for a grand slam title next month! Will he be able to secure his throne?