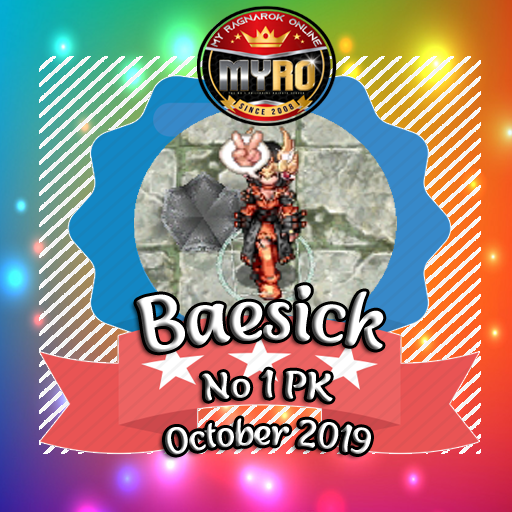 Furtive shadow chaser from the pride of Aldebaran reigned the battlefield, snatching the prestigious October PK crown after dominating the fearsome sura Top 1 Global Fanny, who eliminated the defending champion in the eliminations round, in a 3-0 win in the face-off last October 19 at the MyRO PK arena!

"lahat ng kinalaban ko, kinabahan ako"
It wasn't a very easy road to success, Baesick encountered nervousness, not knowing what punch the enemy would throw, what technique her foe would use, it was indeed a game of cards. Still, eliminations came in her favor, climbing to the top with no defeats she was able to breathe easily as she dominated every foe she could encounter with.

Baesick was the only shadow chaser in the list of contenders. Climbing up the ladder for her wasn't a joke at all, she would stay up late, deleting players from PvP maps just to get the most of point she could ever get.

She was the epitome of pure hard work, mastering different techniques, adjusting to the modern play style of her fellow opponents. This shadow chaser showcased the fusion of stealth and death, she defined what a real PK contender was.

Baesick showed complete control in the face-offs, she was able to hit Top 1 Global Fanny's achilles heel. The sura didn't stand a chance to even get close with Baesick giving the shadow chaser the advantage to easily raze the sura down.

She was able to get the No.1 PK crown and gave pride to her savepoint, Aldebaran. She would like to thank those who helped her and coached her throughout the whole match. Cheers!