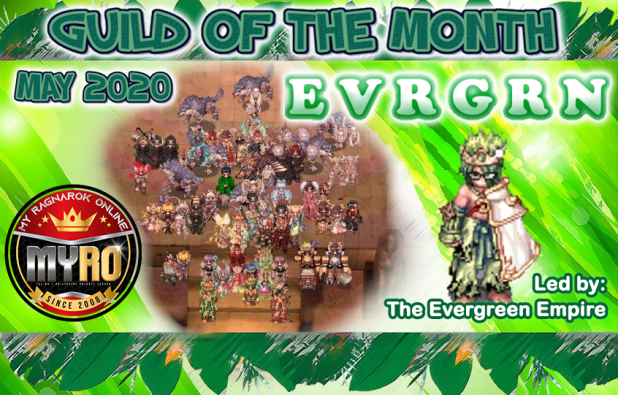 The known pioneers of My Ragnarok Online, the elites of the Upland Village : Payon came back and showed immense domination throughout their run!

Evergreen and its fearsome players started their run with complete domination against their opponent, conquering every big castle they could get. With the help of their alliance, they easily managed to manipulate their opponent giving them only one castle at every end of the WoE or sometimes, none at all.

As the run came to an end and the Guild of the Month came, E V R G R N showed preparedness upon entering the guild arena. With their Ka Planet [guild] as their alliance, they joined the event proper itself to also hinder grf [opponent's guild] from advancing to the Finals.

Semis came and grf were off to a good start, giving them the first point of the round and ofcourse, momentum was on their side. But the succeeding round didn't come to what we expect. E V R G R N and Ka Planet's members turned the whole scene around giving them to straight points advancing Ka Planet's guilds onto the Finals!

With this, E V R G R N was coronated and hailed as May's Guild of the Month Champion! Laiza/The Evergreen Empire [Guildmaster] was also the 4th player to obtain the Grandslam Blazing Helm! This means he has three Burning Helms from his past wins from GOM! He also received PODS and Megaphones!