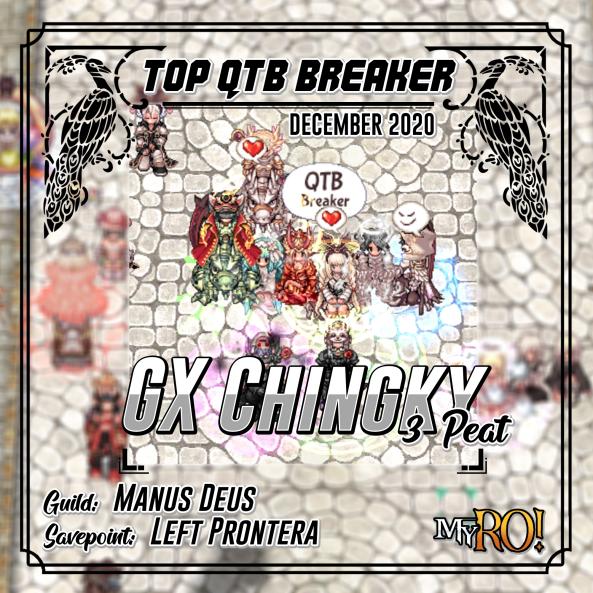 This December 2020, GX Chingky brought defeat once again to her opponents. With straight wins for the past three months, she earned the Grandslam award for the Top QTB Breaker title! With absolute strength, only destruction was left to the other contenders for this esteemed. This Guillotine Cross, hailing from Left Prontera, showed everyone that only she deserves this title.

Owning all those treasure boxes containing wondrous treasures, GX Chingky showed that her victory was without any foul play because it takes more than simple skills to be hailed as the Top QTB Breaker for three consecutive months! Using her high-level knowledge on the ins and outs of the gameplay in the QTB arena, she was able to counter all the spells and kills to defeat all those who oppose her. Her guild, Manus Deus, contributed well to bring GX Chingky to the Grandslam Hall of Fame. The QTB Breaker Balloon, 2 pieces Black Treasure Chests, and 3 pieces megaphones have been doubled for the 3-peat win! Now that is something that would motivate anyone to dash towards the Grandslam title, and GX Chingky is no exception. With extreme skill, mastery of her job, and outsmarting all enemies, it definitely comes as no surprise that she got this award once and for all. Now everyone in MyRO knows not to stand in the way of GX Chingky!

With this Grandslam award comes the opportunity for another contender to enter the QTB Arena and claim the Top QTB Breaker title themselves. Do you have what it takes to claim this sweet title? Come join the ranks now if you do!
Top
Post Reply
1 post • Page 1 of 1